What do freedom and peace mean to you? 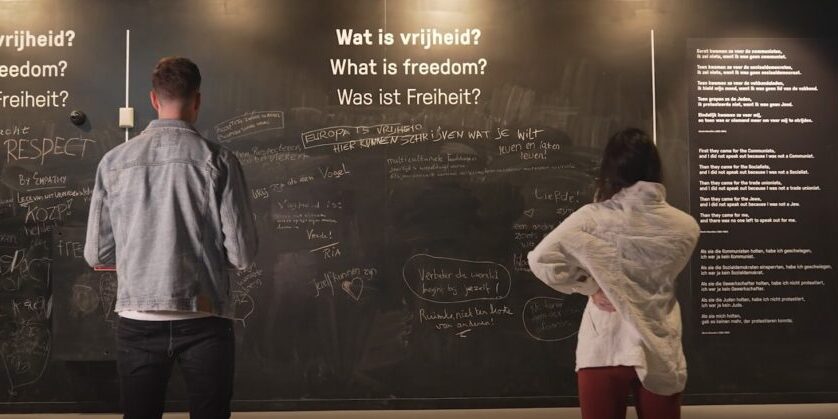 German and Dutch influencers together for peace and freedom

Do you ever realize that peace and freedom are not given? Or do you understand it only too well, because of the news and developments of recent times? At the German War Cemetery in Ysselsteyn and the Freedom Museum in Groesbeek you experience how important the themes of peace and freedom still are today. In Europe, but also beyond.

Freedom has been quite a loaded topic in recent years. But do we really know what we are talking about when we talk about peace and freedom? Especially now that we have lived in peace in Europe for almost eighty years and the eyewitnesses of the Second World War are often no longer alive. It’s hardly surprising, that sometimes we can no longer imagine what it is like to really live without freedom. Even for young people, topics such as peace, freedom, and the Second World War can be too remote from their own experiences. In this campaign, we brought peace and freedom to life for young people in the Netherlands and Germany.

Freedom and peace are not self-evident

We let the German and Dutch influencers – and with that also their followers – confront each other: what is it like to be in a bunker? What do you experience when you see more than 30,000 war dead in a cemetery? What would you do if war broke out? Peace and freedom are not only about the past but also about the present. Can you be completely yourself? What would you do if you were excluded? Would you dare to stand up for yourself and others, or would you follow the crowd? Would you also flee from war? We show the target group that peace and freedom are not for granted. This makes the campaign relevant: not only because it gives young people historical awareness, but especially because the campaign brings war, freedom and peace to the present.

Social themes on social media: go for it!

When it comes to the themes of peace and freedom, opinions and statements can be quite divergent. What makes this campaign special is the respect and positivity shown by the followers in the comments. Learning point of this campaign is: young people are really motivated to think about social issues and social media is just the right place to discuss this. The Freedom Museum and the German War Cemetery confirm this: “Thanks to Brandambassadors we have seen what influencer marketing can do for us”.